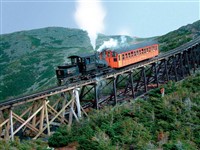 Journey to the top of Mount Washington on the historic Cog Railway and enjoy a delicious lunch at Peppersass Restaurant!

Board the Cog Railway to take an unforgettable journey to the top of Mount Washington. The beauty of the mountains and the thrill of ascending the Northeast's highest peak are just as enchanting today as they were in 1869, when Sylvester Marsh opened the world's first mountain-climbing railroad. Nearly 150 years later, the Mount Washington Cog Railway continues to provide a sense of adventure and history as it carries passengers up a 3-mile-long trestle and the steepest railroad tracks in North America to the 6,288-foot summit of Mount Washington.

But now, railway passengers may also marvel at how the Mount Washington Cog Railway has combined the 19th century and 21st century technologies as they introduce their eco-friendly biodiesel engines. The trains run on the same tracks and use the unique cog technology, giving the same experience that has thrilled passengers for nearly 150 years but in a method kinder to our planet (and without all that soot streaming back into the cars!). Once at the summit, visitors can take in the spectacular panoramic view, spanning the mountains and valleys of New Hampshire, Maine and Vermont, north into Canada to Quebec, and east to the Atlantic Ocean. At the summit is the mile high visitor’s center including a museum (admission included), gift shops, post office, and a year-round weather station. Before ascending the mountain, we will enjoy a delicious soup & sandwich buffet lunch at Peppersass Restaurant, at the base of the mountain.

*roundtrip journey on Cog Railway to top of Mt Washington

*free time at the top of the mountain

Below is a list of pick-up points available on this tour.

Below is a list of pick-up points available on this tour.

It is not possible to display the map. This may be due to Google Maps not being supported in your browser.

Search The location was not found

There are currently no departures available on this tour.

The website timed out while searching for the departure dates. Please try again.